Blast away winter blues with herbs

Posted on November 5, 2014 by simplyradical

Seeing as I’m running workshops at a city farm to help people move to a simpler lifestyle, I’ll start sharing some of the learnings here. I’ve covered lots of different subjects in my workshops this year: growing on balconies and containers; using and growing herbs; growing and pruning fruit; even keeping urban chickens!

The clocks have gone back and it’s dark in the evenings – we’re in late autumn, heading to winter, with a few minutes less light every day. This can be a depressing time, and many of us adapt by enjoying winter fires and drinking hot-toddies. But how many of us use or grow herbs over the winter as a SAD antidote?

Many herbs are evergreen, including rosemary ( helps  with concentration, fatigue and depression) and winter savory. If you know someone with a decent rosemary plant in your area you could experiment with propagating it, even at this time of year – rosemary is a forgiving, easy-to-grow plant.  For instructions, see below with photos. Some tender herbs, like basil, do well indoors all year round – I have one on my windowsill which is flowering now.

I’ve seen a bay thriving indoors in a pot, and you might just get away with taking semi-ripe cuttings of a bay tree, now, if you want to start your own. Nurturing a new plant into life in your home over the autumn and winter is a simple way to bring colour and vigour to the season.

As light levels decline, growth and germination drop off, but we can cheat a bit speeding up germination by sowing indoors in late summer/autumn. Coriander does particularly well (ie bolts less fast) if you sow it in late summer or early autumn, but it’s probably too late now to get much of a crop – but why not experiment? If you don’t take growing herbs too seriously and see it more as play and experimentation, you won’t mind if some of your trials don’t work!

One of the things I like about propagating from cuttings is not only the magic of conjuring new life, it’s yet another way of subverting a system which always wants you to buy things. You just don’t need to shop for plants once you become familiar with taking cuttings. And it’s not difficult to do.

This year I’m also going to experiment with growing mint over the winter indoors by chopping off some of its many runners, placing in a shallow tray and covering with earth to see if I can continue to harvest a supply of fresh mint.

You can still get away with growing garlic now – though it’ll be a long time before you see any signs it’s growing.

And then there’s ginger rhizomes, which you can buy from the supermarket and grow indoors – apparently the best time for this is late winter/early spring. Just push one inch rhizome pieces into the soil, not covered too deep. I have one which is already sprouting, so I’m going to start now and see what happens. Ginger likes partial light, which makes it a great plant for growing indoors. If growing indoors, make sure you have good drainage. Apparently ginger likes humidity, which makes sense if you remember where it comes from, so it’s a good idea to spray the plant with water especially if you have central heating. It makes a handsome house plant, you can move it outdoors in summer, and once it’s grown enough next autumn you’ll be able to harvest some of the leaves or small rhizomes for tea. Not only that, you’ll have the uplifting scent of the leaves; you can give them a stroke whilst watching Christmas movies on TV!

In my next few posts I want to share other ways we can bring nature and beauty closer to us over winter; including growing indoor salad gardens and using natural materials to decorate our homes. 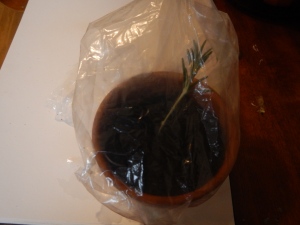 wrap up your cutting to keep humid