Extinction Rebellion: activism is an anti-depressant

As a group of Extinction Rebellion activists glued themselves to a DLR train at Canary Wharf three Fridays ago, a message popped up on the group’s Facebook livestream: Activism is an anti-depressant.

Eighty-two-year-old Phil Kingston was among those up on the train roof to draw attention to the fact that the financial sector is driving the climate crisis, which is already displacing and killing people. And that without urgent action, billions of human beings will die by 2050.

There’s something about witnessing an octagenarian sacrificing his comfort and liberty for the benefit of other human beings which reaffirms ‘something I thought I’d lost’ to quote another message on the Facebook live stream. And of course it’s not just Phil Kingston – more than 1100 people peacefully got themselves arrested this April, in order to cause maximum disruption and push our society to save itself. Among them was Hanna, seven months pregnant, the last person to be removed from the Oxford Circus XR site.

Alongside the so-called ‘arrestables’ thousands more hearts, minds and hands created and supported the Extinction Rebellion phenomenon, whether by offering meditation on Waterloo Bridge, acting as independent legal observers, cooking and serving free vegetarian food for participants, or holding up colourful, witty banners at road junctions. 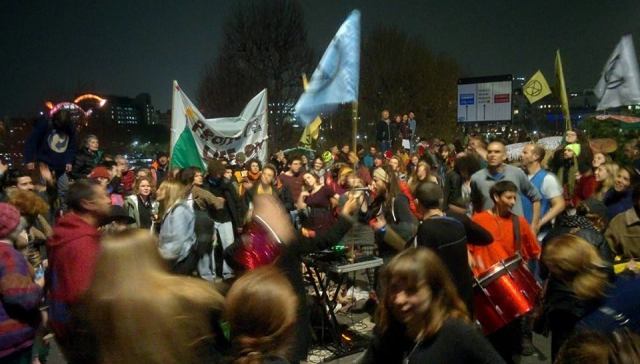 We did this not for direct personal benefit, but for children living today and their children, and for the millions of people in the global South already suffering the impacts of climate change. XR is not perfect; the movement needs to work harder to involve BAME groups and keep highlighting the way structural inequalities drive climate change.

But in our actions we embodied something which our society denies, telling us that we’re apathetic and selfish: Love.  A reverence for life, common to all spiritual traditions across the world. And an instinctual understanding of interbeing – a Buddhist wisdom recognising that all is one and one is all. We are ourselves, but we are also all each other.

We live in a society which denies this truth and actively works against it. No wonder we have an epidemic of anxiety and depression.  So I agree with the Facebook comment: activism can be a practice which feeds us. When we act non-violently and collectively, we embody the interbeing principle and this feeling of connection gives me delight, freedom, and fresh energy.

Peaceful activism is not just about sacrifice – you can feel adventure and purpose when (non-violently) breaking oppressive societal norms.  When we’re all one, I am you and you are me, it means you can let creativity and nature flow through you. It’s a huge relief to know it’s not all down to you, your ego and your mind. And being part of something so vast and creative means that things which looked absolutely impossible start to look more achievable. If this isn’t an antidote for depression, I don’t know what is.

In his book The Miracle of Mindfulness, Thich Nhat Hanh wrote that because people cut reality into compartments, they are unable to see the interdependence of all phenomena. But deep down it seems we all know it.

It was there as I approached Oxford Circus, and a complete stranger walked up to me, beaming, offering me one of her home-made flapjacks. It was there as arrestees were carried off into police vans while other participants yelled ‘We love you’. It was there in the woman serving me food at Marble Arch: ‘How did you get involved? Oh, I was just walking past earlier today.’ And the 71-year-old bearded man doing legal observing through the night at Oxford Circus, who’d travelled all the way from Wales to help out.

‘This Way to Save the Planet’ photo by Jamie Tarlton

It was there in all the passersby who thanked us, and the Oxford Street shop-worker who told me that although it made it harder for him to get to work, he agreed with the action because it was ‘for a good cause’ and that inconvenience was needed. It was there in the stories I heard of kids who no longer needed their asthma inhalers. And it was there in the woman who thanked the campers at Marble Arch: ‘I haven’t heard birdsong here in thirty years. Now I can.’

I laughed very hard many times during XR. And I witnessed many beautiful things. Spontaneous, deep conversations between strangers; dancing on Waterloo Bridge under a huge pink moon.  While there will no doubt be tensions and conflict within such a huge movement, during the week I began to believe that collectively, humans are capable of solving huge problems – if we’re just given the space and power to get on with it.

‘How did they manage all this?’ a couple asked me, taking in the solar panels, trees, stage, singing, musicians, performance, meditation, conviviality. ‘Hive mind’ was my answer. As ‘Being Mortal’ author Atul Gawande says: ‘We’re all so limited as individual human beings, and yet magic happens when we all string together. When that happens, we are almost unlimited.’

2 Responses to Extinction Rebellion: activism is an anti-depressant