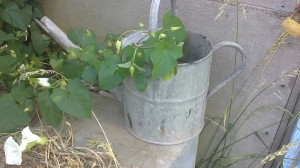 I was overjoyed when I heard I’d been allocated an allotment a few months back. I’d been on the list for so long I’d almost completely forgotten that I was waiting for one. Instead, I’d started growing veg in a raised bed in my back garden (which, being placed on a brownfield industrial site, is very likely still too contaminated for growing crops direct in the soil).

The plot is half an hour away. On top of my raised bed veg, I’m busy maintaining a communal garden around my block, and involved with guerrilla gardening projects and a transition town project. I neither have the time nor incentive to run a conventional allotment, with neat, meticulously-weeded rows of vegetables.

So, I’ve resolved to use forest gardening techniques on my plot. This, in line with permaculture principles, requires minimum inputs whilst giving maximum outputs. The emphasis is going to be on perennials, top fruit and soft fruit like currants. Not only is approach more achievable than conventional allotment growing, it could hopefully provide an exciting opportunity to experiment in sustainable food growing techniques, something I can bring back to my transition town food growing group.

Bouyed up by my plan, I arranged to meet the allotment secretary to look around the plot. Mr Samuels, a surly faced man in his mid 60s, shook my outstretched hand, simultaneously looking me up and down. “You sure you can cope?” were his first words, and his tone was doubtful, if not contemptuous. I clearly did not fit Mr Samuel’s picture of what an allotment holder should look like, being under 50, small, and female.

He led me through the garden, muttering to himself. I noticed he seemed blind in one eye and more than a little eccentric. He pointed to an area covered in waist-high weeds and billowing grasses. Walking around it, he pointed out the plot’s boundaries. I was rapturous. Ok, it was wild and jungle-like, but it was mine! My little plot of land. I had been told by the council that I wouldn’t have to pay any rent for the first year as it was so over-grown. A little blue shed, replete with ancient water butt, lent an air of rustic charm. I felt like a pioneer farmer. I grinned from ear to ear, taking in the sounds of the breeze through the grass, the birds and the crickets.

Mr Samuels seemed surprised by my enthusiasm. “If you don’t like it you can just tell the council,” he repeated. “Oh no,” I retorted. “ I do like it very much.” Didn’t he want to encourage new allotment holders?

A week or so passed. I visited my allotment to collect specimens of weeds and grasses in order to see which plants thrived on the site. This is in line with one of the permaculture principles of: observe what is there, and allow nature to help you garden.

Mr Samuels approached me. “Why haven’t you been here sooner?” he wanted to know. “Why haven’t you started getting rid of all these weeds?”I began to feel like I was late with my homework. Those weeds I had inherited on the allotment had been untouched by the previous owner for at least a year. Surely so long as I took care of my allotment, how often I visited was my own business?

A fox, disturbed by the sound of voices, suddenly emerged from the overgrown weeds on my plot and shot off. I was glad of the distraction. “You scared of them?” he asked. Again, the scornful tone. I was beginning to get irritated. “No.” “You keep them, do you?” Was he seriously accusing me of collecting foxes on my allotment? I looked at him with all the contempt I could muster and carried on watering/tidying/sorting out tools. Several weeks went by and each time, when Mr Samuels spoke to me, it was to criticise or find fault. “You haven’t locked the gate.” “You don’t like gardening, do you? ” “You weren’t here last week. You can always give up the allotment if its too much for you.”  This last part he repeated practically every time he met me.

I heard from others on the allotment that he had bullied another woman before me, and made false allegations about someone else. He had four plots just for himself, two of which were completely overgrown, notwithstanding the fact that waiting lists for London allotments are bursting at the seams, with an average wait of three years.

The allotments had been Mr Samuels’ territory for a long time, I realised. For years allotments and food growing had been a minority pursuit for middle-aged, jaundiced men like him, escaping from their wives. They’d kept the allotments going whilst everyone else drank and smoked and went to champagne parties. How dare they now come and take over his domain? I began to hear stories from other allotments, with similar themes of machismo, having to prove one’s worth to old-timers, and a dislike of change. One allotment secretary always gave the worst bit of ground to new plotholders, I heard –  the justification being that if they survived for more than 12 months, their dedication was proven.

Given this background I decided I would take his comments with a strong pinch of salt. After all he was old and possibly senile. Why let him ruin a beautiful enterprise? The allotment was meant to be a place for me to connect to nature and recharge. 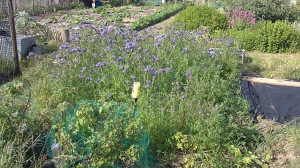 The next allotment work day dawned hot and promising. Myself and my partner were going to finally tackle the waist-high weeds with a grass-cutter hired for the purpose. The mower roared, I donned goggles and swathes of yellow dry grass splintered in my wake. The sun shone down; the cut grass smelt wonderful. Life was good. I began to fantasise about the future of my plot; climbers, a camomile lawn, some espaliered fruit trees – but what was this? Now I’d chopped down the weeds I saw that my plot was a lot larger than Mr Samuels had given it to be. An adjacent wild area, which I’d assumed was another abandoned plot, was far too small for that. Which meant it was probably mine. Which meant I now had 30 per cent more weed-cutting to do, in boiling sun, to a fast-approaching deadline of returning the grass-cutter to the shop.

I decided to check with Mr Samuels whether the adjacent land was definitely mine or not, seeing as he walked past at that exact moment. “It’s yours,” he said. “ Of course, if the plot’s too much for you and you don’t want it –“

Something snapped. “ I DO WANT IT!” I shouted. What was that about a pinch of salt? We traded criticisms loudly at a distance for a few minutes. My partner hates public scenes. “We don’t want to be difficult,” he offered wimpily. This enraged me even more. “It’s not you who’s difficult,” said Mr Samuels, “It’s her!” When my partner said absolutely nothing to defend me, my rage hit boiling point. I turned away pointedly and got back to grass-cutting. An acreage which 10 minutes before, seemed impossible to mow, fell beneath my wrath. 40 minutes later, nearly 2 rods worth of allotment lay waste. Anger has its uses. 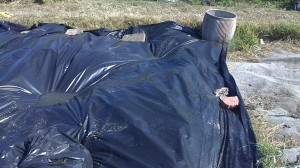